Health | Politics
Senate opens debate on Indian Health Care Improvement Act
Tuesday, January 22, 2008
UPDATE: It's 7:30pm and Sen. John Thune is speaking on the bill. He reiterates that work will continue tomorrow. He finished talking around 7:38pm. The Senate is back into a quorum call. At 6pm, :Senate Majority Leader Harry Reid said he hopes to finish work on S.1200 TOMORROW. Since Republicans are going on a retreat, votes would not happen until after 6pm on Wednesday, he said. "The fact is there are people dying in this country because of inadequate health care," Sen. Byron Dorgan said on the floor after Reid spoke. The White House today issued a Statement of Administration Policy on the bill. It threatens a veto if a provision related to fair wages is not removed. The SAP also objects to numerous other provisions, including those affecting urban Indians. The National Indian Health Board said it is working with the White House, the National Congress of American Indians and the Alaska Native Tribal Health Consortium to address the SAP [5pm Update]. 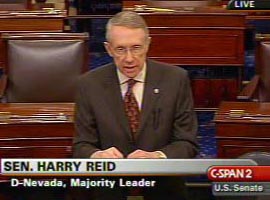 After a winter break, the Senate convened this morning to consider S.1200, the Indian Health Care Improvement Act. At the opening of today's session, Sen. Harry Reid (D-Nevada), the Senate majority leader, said morning business will last about an hour. After that, debate will open on the bill. Reid said he expects amendments to be introduced at that time. But the first vote won't take place until later today, he said. "We're not going to vote until 5:30," Reid said. Reid said it was critical to pass the legislation today. "We've got to do this," he said. "The sickest and worst health care is on Indian reservations." 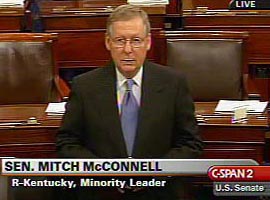 Sen. Mitch McConnell (R-Kentucky), the Senate minority leader, countered that the bill wasn't as important as a national security measure that was shelved at the end of last year. He cited other pieces of legislation that he said were higher on the Republican agenda. "American lives will not depend on the passage of Indian health care by the end of this month," he said. Sen. Max Baucus (D-Montana), the chairman of the Senate Finance Committee, spoke of the federal government's responsibility to Indian Country. Parts of the bill -- those related to Medicaid, Medicare and children's health insurance -- went through his committee. "It is an abomination, it is a tragedy of how little attention we pay to Native Americans' health care needs," Baucus said. 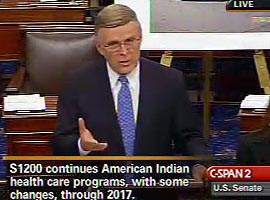 After about an hour of morning business, Sen. Byron Dorgan (D-North Dakota) came to the floor around 12:15pm to begin consideration of the bill. The chairman of the Senate Indian Affairs Committee said a substitute version is being finalized for today's vote. "It is long past the time for this Congress to reauthorize this program," Dorgan said, as told several stories about health care challenges on reservation in North Dakota. Dorgan spoke for about 30 minutes. 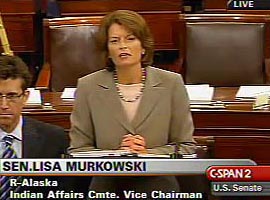 At 12:48pm, Sen. Lisa Murkowski (R-Alaska), the vice chairman of the Senate Indian Affairs Committee, came to the floor. "This legislation, I believe, brings new hope for Indian health It does represent a step forward." "This day has been far too long in coming," she added. Murkowski spoke for about an hour. At 1:40pm, Murkowski deferred to Sen. Judd Gregg (R-New Hampshire), who asked for 10 minutes to talk about the U.S. financial market and economic policy. He said Sen. Ted Stevens (R-Alaska) also wants to speak. 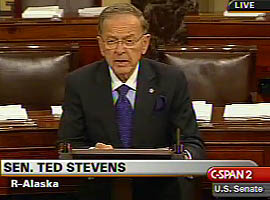 At around 2pm, Stevens came to the floor. "It's been 15 years since the Indian Health Care [Act] was reauthorized," he said, citing health care disparities in Indian Country and among Alaska Native villages. "The health status of Alaska Natives and American Indians is poorer than the average American," he added. "Many of our people live in remote communities with little economic [development], high unemployment rates and low income rates. These conditions create create a perfect storm of health care obstacles for Alaska Native people." 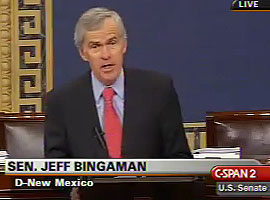 Sen. Jeff Bingaman (D-New Mexico) started speaking around 2:15pm. He said health conditions have improved since the IHCIA was first passed in 1976. But he said the IHS needs to do more to address disparities among American Indians and Alaska Natives. He said the federal government spends more on Medicaid, Medicare and other programs. "The average American gets substantially more per recipient ... than does the average Indian American," said Bingaman, who is introducing an amendment -- with Sen. John Thune (R-South Dakota) as a co-sponsor -- to expand contract health care services. "I fully support the amendment," said Dorgan. He said it would "stretch the Indian health care dollars," before talking about economic policy. After Dorgan finished speaking, the Senate went into a quorum call around 2:50pm. The quorum call was suspended and Sen. Debbie Stabenow (D-Michigan) began to speak around 2:54pm. She said the bill would "modernize" the Indian health care system. "It's a vital component in improving and updating health care services in Indian Country," she said. 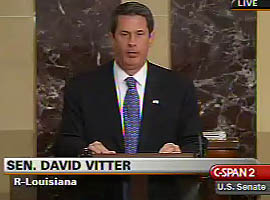 At around 3:00pm, Sen. David Vitter (R-Louisiana) said he wanted to introduce an amendment. Dorgan objected in order to talk with Vitter about the amendment. Vitter came back -- the amendment is about abortion. It would bar the use of federal funds to perform abortions except in certain situations that are outlined in what is known as the Hyde Amendment.

"I think this is very appropriate," said Vitter, who called the amendment a "positive statement for life." A vote is expected later.