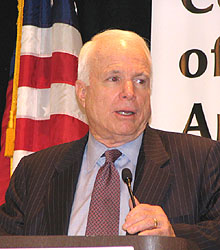 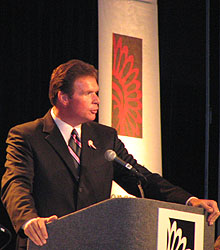 "John McCain may have been the GOP's national standard-bearer just a year ago, but now he's in electoral trouble at home. And this time no one can claim it's because of Sarah Palin. A new Rasmussen poll shows the Arizona Senator in a dead heat with potential GOP primary challenger J.D. Hayworth. Mr. Hayworth served as a congressman from 1995 to 2006, when he lost in a squeaker to Democratic Tempe Mayor Harry Mitchell, who prevailed by hounding Mr. Hayworth over his ties to disgraced lobbyist Jack Abramoff. Mr. Hayworth now runs a popular Phoenix talk radio show. Though he hasn't formally declared his candidacy, he has expressed interest. According to Arizona Republic columnist Dan Nowicki, Mr. Hayworth is partly motivated by a "long-standing grudge" against McCain aide Mark Salter, whom he has accused of trying to "blackmail" him in 2005 into ceasing his criticism of Mr. McCain's comprehensive immigration reform bill by threatening to publicize Mr. Hayworth's Abramoff connections. For his part, Mr. Hayworth now says his problems with Mr. Salter would have no impact on his decision about whether to challenge Mr. McCain. "No, I would never run for office, quote, out of spite, but I do have a profound disagreement with Senator John McCain over the concept of amnesty, whether he wants to call it comprehensive immigration reform or a pathway for guest workers to remain," said Mr. Hayworth." Get the Story:
Allysia Finley: A McCain Upset? (The Wall Street Journal 11/23) Also Today:
AZ/DC Blog: Kyl skeptical of Hayworth Senate run (The Arizona Republic 11/24)
Blog Briefing Room: Kyl says Hayworth unlikely to run against McCain, let alone win (The Hill 11/24)
This story is tagged under: