The 61st annual National Congress of American Indians (NCAI) is underway in Fort Lauderdale, Florida, this week. Here's a wrapup of some of the events that took place on Day 2 of NCAI. 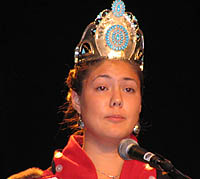 New Miss NCAI
A new Miss NCAI was introduced yesterday morning after winning the pageant the night before. Madeline Soboleff Levy, 20, is a Tlingit-Haida from Alaska whose platform focuses on improving educational levels among American Indians and Alaska Natives. The outgoing Miss NCAI 2003-2004 is Cheryl V. Dixon of Isleta Pueblo, New Mexico. Happy. Healthy. Terrific?
Bureau of Indian Affairs head Dave Anderson led NCAI through his usual cheer (but only once) before highlighting some of the agency's challenges and achievements. He said the BIA is overhauling its policies to better serve tribes and tribal members. "We need to set a new course for the BIA," he told tribal leaders. "What we are doing doesn't work." Anderson, who joined the Bush administration in February, is creating a book of tribal success stories to share with Indian Country. He said he hopes tribes can learn from one another in areas like economic development. He also said people need to know that the BIA is making positive changes. "We do many wonderful things at the bureau but it never gets out," he said. Some of those successes, he said, include the first "green" BIA school, a project to help the Warm Springs Tribes of Oregon become the majority owner in a hydro plant, a BIA records repository in Kansas and a state-of-the-art computer command center. "The bureau has to be more accountable," he said. Don't Vote Me Out
Special Trustee Ross Swimmer isn't running for re-election but painted a very bleak portrait of what might happen if his boss were voted out of office next month. A new administration, he said, would take a year to study trust reform and another year to hire even more consultants to figure out what to do. "It would take two to three years to get where we are now," he argued. He said the Bush administration was a year away from an operating title system and was "almost" finished with a realty system. Swimmer also spent a considerable portion of his address attacking the plaintiffs in the Cobell v. Norton trust fund lawsuit. "We got pretty beat up last week," he said, referring to a temporary restraining order accusing the Interior Department of retaliating against individual Indians. Swimmer admitted a memo he authored about the court order led to widespread confusion among subordinates. But he denied ever directing anyone to stop issuing checks to trust beneficiaries. Swimmer then claimed the plaintiffs are trying to kick Indian people "out on the street" by supporting a receivership for the trust. He said that 95 percent of BIA and OST employees are American Indian or Alaska Native. But when pressed by Darrell Flyingman, a recently-retired BIA employee and representative of the Cheyenne-Arapaho Tribes of Oklahoma, Swimmer couldn't say how many Office of Special Trustee employees are Native. Flyingman said qualified Indians are passed up for leadership roles due to cronyism at the department. Swimmer also suggested the trust was worsened when the Clinton administration eliminated a number of BIA jobs in the mid-90s. "We RIFfed the wrong ones in 1996," he said. Image, Perception, Reality
Charles Colombe, president of the Rosebud Sioux Tribe of South Dakota, brought some much-needed humor to the session after Swimmer's sobering speech. He called trust reform an oxymoron. "It's not happening," he told NCAI. "It's like 'Indian money,'" he said. "Or 'Russian intelligence.'" Colombe said a major problem with the lack of progress in fixing the trust is too many chiefs at the fort. "We don't know who the boss is," he said. "Is it BIA or is it OST?" But Colombe, like Swimmer, praised the passage of the S.1721, the American Indian Probate Reform Act. He called it the most important legislation of his lifetime. While it won't solve all problems, he said it will help consolidate fractionated ownerships. A Broken Trust
Keith Harper, a Native American Rights Fund lawyer handling the Cobell case, then spoke and gave a blistering response to Swimmer. "Facts are a stubborn thing and unfortunately the record here is not Swimmer says it is," he said. "The record is abysmal," he later said. Harper said the trust is only "minimally better" than it was before the Bush administration took over and in some ways is "worse." He said there is still no accounts receivable system and no way to account for Indian funds. "The accountings they perform are an absolute joke," he argued. Harper said DOI continues to "dictate" to Indian Country instead of working with tribes and individual Indians. He said the plaintiffs continue to support a receivership because the trust still hasn't been fixed in more than a century. "A receivership does not mean BIA employees on the ground level lose their jobs," he said. "A receiver comes in and replaces the leadership. That's all. And it's temporary." Looking Ahead
It's Health and Fitness Day at NCAI, with updates on health care, Native Boys and Girls Clubs, the Just Move It diabetes initiative and a Healthy Lifestyles Walk and Rally. Sen. Tim Johnson (D-South Dakota) is on the agenda and breakout sessions will focus on IRS, violence against women, homeland security and contract support costs. Relevant Links:
National Congress of American Indians - http://www.ncai.org