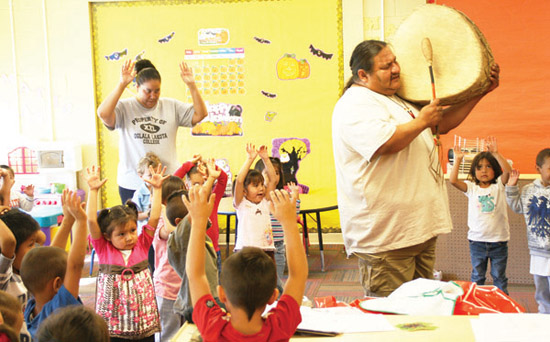 PINE RIDGE, SOUTH DAKOTA –– They’re drawn to the drum. When they touch it, they smile. When they hear it, they dance. And what they don’t yet know is that drum will become part of their lives with classroom sessions each Wednesday. These more than 30 youngsters are part of Luta Thunder Hawk’s Pine Ridge Head Start program – a program that’s housed in classrooms behind Big Bat’s at the “four corners” intersection in the village. “I’m trying to get more of our culture –– the language –– into the classroom,” said Thunder Hawk. Could you maybe commit to coming once a week, like on Wednesdays?” The answer from Duane Martin Sr., a fluent Lakota speaker, was affirmative. And so it is. Informal or otherwise, these Pine Ridge Head Start students in Level II and Level V soon will become familiar with aspects of their language –– aspects that will lead them into their own indigenous culture developed, practiced and honored for thousands of years. Concerned about that, they joined forces to do something about it. What they are doing is simple, really, but the impact may reach forever into the future – keeping the Lakota culture alive through language, singing and dancing. “They’re learning the stories, the language behind the drum, the values – the ones that encourage them to say ‘no’ to drugs and alcohol,” said Martin, the founder and leader of the Pine Ridge Indian Reservation’s Strong Heart Society – a nonprofit that also gets involved in helping bring clothes, food, toys and other household goods to the reservation on a regular basis. Teacher Denise Apple is an active part of the Head Start team, which includes Candy Spider, a substitute teacher, Cody Lacey and Ladanza Afraid of Bear, both teacher aids. Both Thunder Hawk and Martin know that their lives are enriched by the language of the culture – Lakota. They also share a determination to have Lakota students become speakers of the culture’s language. That, of course, can be taught through the drum – in this case, a healing drum. That’s what Martin was doing last week in a first-time guest appearance at the Head Start school. And that’s what he plans to continue doing. “I do this for the community’s schools,” said Martin, moments after bidding the youngsters farewell for the day. “Whenever they want me, I’m going to be there.” He said that finding gas money to get to some schools with requests “can be the key sometimes,” but that “usually gets resolved” before he has to meet an appointment somewhere on-reservation or off-reservation. “I take the time to give the children what they need,” said Martin, who has an easy coaching style with youngsters. “I present a message to the children of those who are thinking about doing drugs.” Knowing that youngsters learn quickly in a tactile way, Martin allows – actually encourages – them to touch the drum he uses to carry his “no alcohol/no drugs” message. “I ask them to always say ‘no’.” And he times that message so that it starts just before the much-anticipated dancing song that talks to them through the drumbeat – an extension of the Lakota heart. In fact, Martin even shows them how he holds the drum -- when he is sitting singing it touches his heart -- something he demonstrates while inviting them forward to see how it’s done for the clarity of the anti-dependency message. Singing songs he has written “for children,” Martin says that connecting with children through the drum’s storytelling is an effective way to set the anti-alcohol and anti-drug message in their hearts “so that as they grow, it becomes a cultural value” for them. Committing himself to sharing the drum and its message with Head Start students about two months ago, Martin said that “when teachers call, I say ‘yes’ to the appearance and ‘no’ to the students when it comes to alcohol and drugs.” Calling it “the sacred drum,” Martin shows the Head Start students that it has hide on both sides – compared with other one-sided drums – to continue the message from the drumstick to his heart. “When I sing, the full-circle connection becomes a reality,” said Martin, who lives near Sharp’s Corner, well north of Pine Ridge village. Enthused by their forthright access to the drum, many of the students crowd him for a closer look and some invite themselves to touch it. In fact, he encourages the children to touch the drum so they can “feel the song” that it is designed to sing. Martin then sings the positive songs of a drug-free and alcohol-free lifestyle. Certainly, not all of the two-year-olds, nor all of the five-year-olds. catch the message, particularly those who are not already speaking Lakota. However, Martin’s patience --and his passion for fluency -- in the language, keeps him on track with dance songs that invite group involvement and movement. Mostly, Martin connects with them. Mostly, they connect with Martin. And thus, the delivery of healthy lifestyles is under way – perhaps only one small step at a time, but nonetheless under way. The message is delivered to the clapping, front-tooth-missing, jumping enthusiasm manifest on one of many mornings by Head Start children who “get it” once the songs begin. Furthermore, convinced the message will not be lost, Martin revels in the “two-sided” connection. He answers their questions and they sit with eyes locked on the musical message that’s about to grace their ears and their young Lakota hearts. “Isn’t it great,” he said, wiping the sweat from his brow. “It’s just fantastic.” (Contact Randall Howell at:arcticman47@yahoo.com)
This story is tagged under: