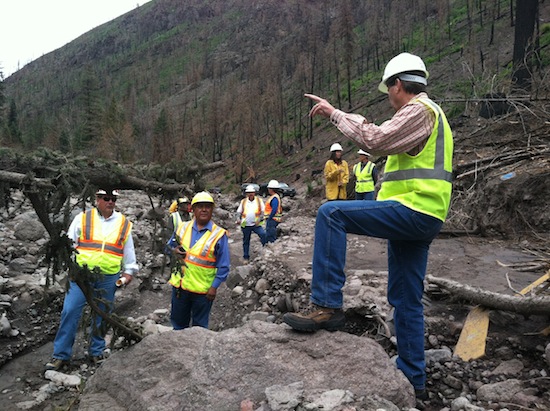 "Many of this country’s people affected by the great number and variety of natural disasters over the past decade or so have qualified for federal emergency aid in rebuilding. Not only have they qualified for the money, they’ve actually gotten it, and been able to begin the long process of restoring their lives and communities. But Santa Clara Pueblo, which had begun very successfully to rebuild after the devastation to its watershed by the Cerro Grande Fire in 2000, is now apparently in the position of being unable to access more emergency funding to recover from the far more disastrous Las Conchas Fire last year. Somebody at FEMA needs to listen up: A third disaster, in the form of flash flooding down the all-but-destroyed Santa Clara Canyon drainage, is a real possibility. And in this disaster, unlike in the other two, the tribe stands to lose not only most of its community buildings but also, potentially, human lives. " Get the Story:
Editorial: Pueblo Facing Potential Disaster (The Albuquerque Journal 7/11) Related Stories:
Santa Clara Pueblo waits on federal funds a year after major blaze (7/9)
Santa Clara Pueblo working to address flooding and fire issues (09/29)
Bandelier National Monument in New Mexico reopens after blaze (9/27)
Santa Clara Pueblo still reeling from devastation caused by fire (8/18)
Native Sun News: Wildfire damages sacred sites in New Mexico (7/13)
Santa Clara Pueblo prepares for flooding as fire continues burn (7/8)
Native Sun News: Wildfire damages sacred sites in New Mexico (7/8) Outside: Interview with Santa Clara Pueblo Lieutenant Governor (7/6)
Santa Clara Pueblo declares emergency as fire slams reservation (7/1)
Cochiti Pueblo prepares evacuation plan due to threat from fire (6/28)
Wildfire poses threat to Cochiti Pueblo in northern New Mexico (6/27)
Join the Conversation