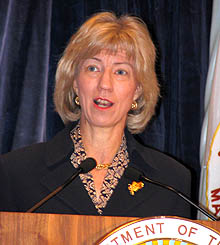 "It takes a special something to become the first and only member of George W. Bush's Cabinet investigated formally for criminal corruption. That distinction goes to Colorado's own Gale Norton. I write not to inflict more infamy on the former interior secretary as federal grand jury subpoenas make their way into her mailbox. Rather, it's worth noting how far the Interior Department has come since Norton, her successor and their one-time boss, the former oilman turned president, were giving away oil-shale leases like samples at Costco. It's tough to keep straight all the scandals that plagued the Bush Interior Department, what with its Jack Abramoff entanglements and the sex, drug use and graft rampant in its oil and gas royalties office. Let's not forget the stink for which Norton is being probed. After resigning from interior, she took a job as an adviser to the oil-shale division of Royal Dutch Shell — the company to which she had granted three of the much-coveted six leases to extract oil from Bureau of Land Management land. After 100 years of mostly fruitless efforts, oil shale is still, at best, experimental. The leases allow companies to test technologies that ram-rod rock with massive heated prongs. With virtually no accountability, it gives them free rein to expand their research into five commercial developments in Colorado. A grand jury is investigating whether Norton illegally used her interior job to benefit the company. (You think?) She was subpoenaed last week." Get the Story:
Susan Greene: Integrity breaks new ground at Interior Department (The Denver Post 10/22) Related Stories:
Subpoenas in Gale Norton corruption probe (10/12)
Norton reportedly discussed job opportunities (09/18)
Gale Norton under investigation for corruption (9/17)
This story is tagged under: