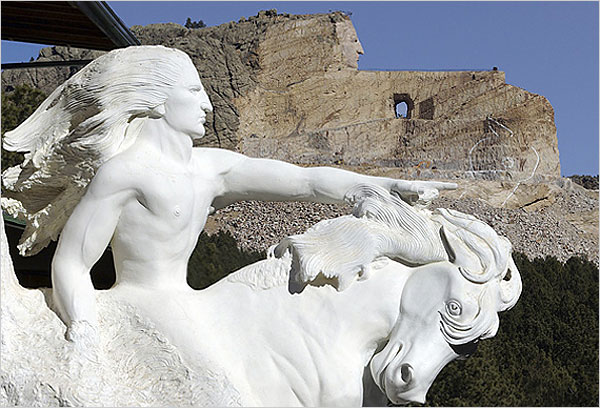 "They dynamited Crazy Horse’s mountain again the other day, sending 4,400 tons of granite crashing onto a growing pile of Black Hills rubble. An eruption of dust ripped across the mountainside like a yanked zipper. There was a flash, then a boom that made a thousand people three-quarters of a mile away jump at once, then applaud. It was one of the biggest blasts yet in a project that has seen a lot of them in 60 years, though afterward the mountain looked pretty much the same. The carving of this South Dakota peak into a mounted likeness of Crazy Horse, the great Sioux leader, has been going on since 1948. It’s a slow job. After all this time, only his face is complete. The rest — his broad chest and flowing hair, his outstretched arm, his horse — is still encased in stone. Someday, long after you are dead, it may finally emerge. The memorial, outside Rapid City, is only a few miles from Mount Rushmore. Both are tributes to greatness. One is a federal monument and national icon, the other a solitary dream. A sculptor, Korczak Ziolkowski, worked at it alone for more than 30 years, roughing out the shape while acquiring a mighty beard and a large family. He died in 1982 and is buried in front of the mountain. His widow, Ruth, lives at the site and continues the mission with her many children. I have to admit: Mount Rushmore bothers me. It was bad enough that white men drove the Sioux from hills they still hold sacred; did they have to carve faces all over them too? It’s easy to feel affection for Mount Rushmore’s strange grandeur, but only if you forget where it is and how it got there. To me, it’s too close to graffiti. The Crazy Horse Memorial has some of the same problems: it is most definitely an unnatural landmark. Some of the Indians I met in South Dakota voiced their own misgivings, starting with the fact that it presumes to depict a proud man who was never captured in a photograph or drawn from life." Get the Story:
Lawrence Downes: Waiting for Crazy Horse (The New York Times 9/2)
This story is tagged under:

Trending in News
1 'It makes you really not like your people': #StopDisenrolllment campaign returns amid rise in tribal removals 2 Tim Giago: Who are these ‘fanatics’ honoring? 3 'An Indian is an Indian is an Indian': Tribes defend sovereignty amid attack on Indian Child Welfare Act 4 Native American veterans still struggling to get the health care they were promised 5 Tule River Tribe getting ready to join cannabis business
More Stories
History: Excommunication of Indian Mormon leader City council supports Little River Band police deal
Share this Story!