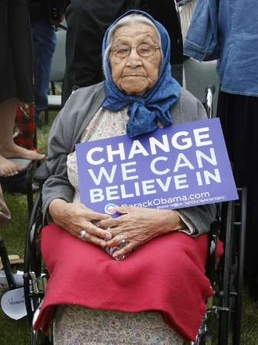 "I worked for Obama on the Crow and Northern Cheyenne reservations in Montana all summer last year. One of the highlights was spending nearly a full day at the veteran's park in Crow Agency waiting to listen to Obama speak when he visited. You ever been to the reservation? Not one of those 10 square mile ones full of casinos some parts of the country has, I mean one of the ones in the West? Picture something roughly the same size as Massachusetts. 60%+ unemployment. 90%+ under the poverty line. Broken down houses with 20 people living in them. Trailers that haven't had heat or windows in them since most of the people posting here were born. Crumbling schools, drop out rates that make the worst cities in America look like paradise, no healthcare, no jobs, no industry, rampant alcoholism and drug abuse, violence, abuse, no hope... Or maybe there was a little bit of Hope... People turned out to hear Obama speak. There were people who rode on horseback to hear Obama speak because gas was topping $6 a gallon on the rez and they couldn't afford to drive. They listened. They cheered. They adopted him into the tribe and gave him a new name. Obama was the first presidential candidate to campaign on the rez. Not that year's primary, but ever. Nearly a century since Native Americans got the vote, and this was the first time anyone showed up to ask them for it, and they gave it to him in record numbers. Obama made a lot of promises to them that day. Made a lot of promises to Native Americans as a whole. Most are never going to be fulfilled, most won't even be acknowledged again. They certainly won't be happening a few months into office as he works to accomplish what the rest of the country elected him to do." Get the Story:
brillo: Just a Bone? (Daily Kos Diary 6/17)
This story is tagged under: