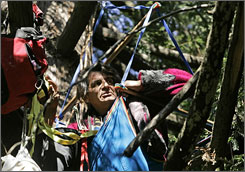 "For a year now, protesters have been squatting on trees at UC Berkeley's Memorial Stadium to protest plans to build a $125 million sports training center. When protesters fall from one of the trees and break their bones, as has happened at least twice, people laugh and liberals start to wonder if perhaps there is a god. Over the years, activists have lodged many protests to fight severe injustices in the world, such as racial inequality and genocide. At times, I've disagreed with protesters - on the Iraq war, for example - but I at least had to respect their commitment to make a difference on a life-and-death issue. In the case of the "People's Perch" - as some are calling the yearlong Berzerkley tree-squat - never before has so much been done for a cause so trivial. The tree-sitters argue that in fighting to save some 100 trees, they are protecting "a healthy, functioning native oak ecosystem." One problem: The stadium property is not pristine wilderness. Most of those trees owe their existence to UC landscaping. Like young children, the tree-sitters have no sense of proportion. They can leave at any time. They eat and mix with others as they will. The worst they have to fear is five days in jail. Yet they equate their plight with that of Gitmo inmates? It's a Peter Pan protest. Activists go by kiddie names - Running Wolf, Redwood Mary, Midnight Matt. And they have a child's sense of what is important. In a world darkened by genocide, starvation and ignorance, they see fit to champion the cause of landscaped trees, which, by the way, UC has offered to replace on a 3-to-1 basis." Get the Story:
Debra J. Saunders: With their heads in the trees (The San Francisco Chronicle 12/4) Earlier Story:
Berkeley protest branching out (USA Today 1/10)
This story is tagged under:

Trending in News
1 'It makes it hard to like your people': #StopDisenrolllment campaign returns amid rise in tribal removals 2 Native American veterans still struggling to get the health care they were promised 3 Tim Giago: Who are these ‘fanatics’ honoring? 4 Tule River Tribe getting ready to join cannabis business 5 Hunter Biden's name used to legitimize sale of fraudulent tribal bonds
More Stories
Rumsey chair named to state Native commission NMAI Holiday Art Market in DC and New York
Share this Story!