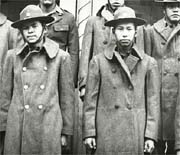 "Frank Sanache was 83 years old when a bill was first introduced in the United States Congress honoring him and dozens of other American Indian veterans of World War II. He watched as it was introduced and failed to win passage in the next session of Congress. Sanache died in 2004, with the legislation still stumbling from one committee to the next. Now, three years later, it might actually be passed. "Frank and the others didn't live to see it, but it's important these brave men are honored," said Robin Roberts, a member of the Meskwaki Indian tribe in Tama who is working to get the men Congressional Gold Medals. "They are all gone now. Frank was the last one. But they are still heroes." Sanache and 26 other members of the Meskwaki tribe enlisted in the Army together in January 1941. Eight of them eventually served on North African and European battlefields as "code talkers." Their use of codes derived from their native languages in radio transmissions was impossible for the enemy to decipher, and the men's service was considered invaluable to the Allied war effort. Twenty-nine code talkers from the Navajo tribe were awarded Congressional Gold Medals after the release of "Windtalkers," a popular movie starring Nicolas Cage. Senators and representatives from Iowa and other states, both Republicans and Democrats, then began an effort to get similar recognition for code talkers from 17 other Indian tribes." Get the Story:
John Carlson: U.S. might at last honor Meskwaki war heroes (The Des Moines Register 9/23) A Choctaw Code Talker Story:
Service of nation's first code talkers not forgotten (McClatchey Newspapers 9/24) Related Stories:
Meskwaki Code Talkers granted military medals (01/17)
Senate committee to hold hearing on Code Talkers (09/02)
Obituary: Frank Sanache, last Meskwaki Code Talker (08/25)
Meskwaki Code Talkers recognized by state of Iowa (04/08)
This story is tagged under:

Trending in News
1 Native American veterans still struggling to get the health care they were promised 2 'An Indian is an Indian is an Indian': Tribes defend sovereignty amid attack on Indian Child Welfare Act 3 Body of missing teen from Crow Tribe found in Montana 4 Native Sun News Today: Town okays water for KXL; tribes hold out 5 Indigenous musicians come together in a sacred and safe space
More Stories
Opinion: Pit River government in shambles Review: Alexie's 'Diary' of a nerdy Indian
Share this Story!