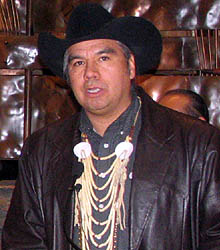 "I am writing in response to the wildly inaccurate and biased article by Jodi Rave about the current governmental crisis at the Mandan, Hidatsa and Arikara Nation. Make no mistake, there are problems on our reservation, but the fault doesn't lie with my administration as claimed. The fact is that my administration managed our tribe responsibly for eight years without the kind of uncontrolled spending that has happened since I left office and which has led to unprecedented layoffs. As we all know, debt in and of itself is not bad. Governments and corporations routinely operate with debt. The key is that the debt has to be manageable and secured, and that is exactly what our debt was. The fact is that under my administration, all tribal spending and borrowing was audited every year. When I took office, we had failing audits. By the time I left office, our tribe had four consecutive years of good audits in a row. This is public record. The reason for all of this is that after I was elected chairman, I put into place a long-term plan to invest in schools, over 200 completed master degrees for tribal members, new Head Start buildings, community water lines, elder organizations, our Boys and Girls Club, land purchases, community centers, and new housing. All spending decisions were made with the approval of the council, which the current chairman sat on for eight years, including four years as treasurer and two as vice-chairman. In fact, approval is required under our constitution for any spending. Nevertheless, one of the reasons I ran for a third term was to bring more fiscal responsibility to the tribe, because I saw the potential for misspending without strong leadership. So last fall, I campaigned on a platform to create a new constitution with a balanced budget, separation of powers, and the power of the people to recall elected officials." Get the Story:
Tex Hall: Tribal spending problems not fault of previous administration (The Billings Gazette 2/21) Relevant Links:
Mandan, Hidatsa and Arikara Nation - http://www.mhanation.com Related Stories:
Jodi Rave: Tex Hall leaves tribe with $100M-plus debt (2/12)
North Dakota tribe cites $100M-plus debt (2/9)
North Dakota tribe announces layoffs of employees (2/8)
Tex Hall still fighting loss of tribal election (1/19)
Tex Hall mulling next step in election dispute (1/11)
Tex Hall gets day in court over disputed election (12/20)
Tex Hall asks tribal court to call new election (11/30)
Tex Hall loses challenge to election results (11/20)
Tex Hall challenges results after losing election (11/16)
Tex Hall loses re-election bid at Fort Berthold (11/9)
Tex Hall facing tough campaign for re-election (10/10)
Tex Hall seeks third term as chairman of tribe (09/21)
Tex Hall faces eight challengers in chairman's race (09/05)
North Dakota tribe's refinery under scrutiny (08/23)
North Dakota tribe to host Lewis and Clark event (08/14)
Tribal members debate oil refinery on reservation (08/02)
Army Corps holds hearing on return of land to tribe (06/27)
Army Corps sets hearings on return of land to tribe (06/15)
Tribe seeks funds to complete oil refinery study (05/09)
Yellow Bird: The rising price of ... ethanol? (04/17)
BIA to hold public hearing on tribe's oil refinery (10/20)
N.D. tribe to avoid burial sites in quest for oil (03/10)
Reservation residents oppose proposed oil refinery (03/10)
N.D. tribe invests in $80 million refinery (03/14)
This story is tagged under: